You are here: Home / Fiction / Still She Cried | Anuradha Bhattacharyya
7

This is and extract from the novel Still She Cried by Anuradha Bhattacharyya. Her novel One Word has won the prestigious Chandigarh Sahitya Akademi Award of Best Book of the year 2016.

Chapter 1: All in Her Hands

Consider Parul as not capable of thinking straight from the heart. There she was, standing on the balcony of her flat, overlooking the big lawn. She was wearing a soft cotton long skirt with the loose top tucked in at the waist. Her hair, short and falling in large curls round her face, looked freshly washed. Occasionally she tucked a lock of hair behind her ear and it kept slipping back. It was a useless gesture, just like she was trying to put aside a thought that kept slipping back into her mind.

She was thinking of Bijit. It was an unpleasant thought, testing her patience. He had been very cooperative in the past, more than expectation. But recently he had started insisting on a job for her.

Parul wanted to avoid the topic. She was in every way like her friends back in Kolkata. They had studied, married, had children and were now looking for a job. Except that, she had done her PhD first. 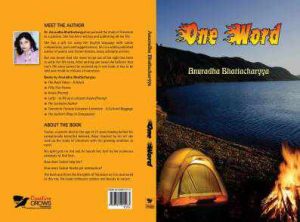 All the other things had taken a back seat. So when Bijit insisted on her taking up a job, she balked. She could not see the direct link between qualification and job. There was something missing in the chain that she wanted to fix. Fix it first. Otherwise, there was no joy in all that she had achieved so far.

In Delhi, September is humid without rains. As she stood looking down at the lawn, her forehead moistened with beads of sweat. She absentmindedly bent towards her waist and wiped them off with the material of the skirt. There was no electricity so she had no wish to go indoors.

There was still some time before the film would begin. It was a Sunday.

After breakfast, Bijit was working on some designs sitting at the dining table. He had gone out in the morning to bring milk. When he returned, he announced,

One of my old friends from school will visit us in the evening. Keep something ready to serve him. Don’t let me down.

Sandy, Sandeep Singh Khanna. He is here on business, living on rent in Block A. Will be here for a while. Otherwise, he lives in Punjab now. He attended school with me in 1973-74, for a few years, until his parents went back to Punjab.

I can prepare some cutlets.

Really? Have you got all the ingredients?

Parul, salt is a must in every food. You don’t have to tell me whether or not you have salt at home.

I was just telling it to myself.

Saying that, Parul finished her cup of tea and left the dining table. She did not like to be contradicted. She did not like to be told what to do. She knew how to prepare cutlets. But she had never served Bijit any cutlets before. Now she was anxious to prove her ability as a homemaker in front of a guest. That too someone from Bijit’s past.

They had three small rooms: the bedroom, the dining room and the kitchen. The kitchen was as large as the bedroom. They had a large refrigerator. Parul often wiped the handles of the refrigerator as she hated the oil stained aperture. Bijit had the habit of opening the fridge without washing his hands. She smiled an amused smile every time she wiped off the oil with a tissue paper.

When Parul left Bijit, she did not go to the kitchen. She left her empty cup on the dining table and went straight to the bathroom. It was a small enclosure where the basin would hit you constantly as you moved around. The toilet was an adjacent room, even smaller in size.

After her bath, she went to the bedroom. There lay the covers, thin linen just enough to disappear under, without being stifled. She felt an urge to fold them up. It was not her habit. And there was no need. Soon she would be entering the bed again.

Now she reluctantly folded the covers and straightened the bedsheet. Then her eyes fell on the head of the bed. It was littered with newspaper, books, pens and her watch. She considered putting everything in order, but dismissed the thought as a waste of time.

Bijit sat there scribbling away. He wore his pyjamas and a loose vest. His arm was covered with hair. The white vest had a small hole on the backside. His fair skin peeped out of it, glowing in its smoothness. Whenever Parul looked at Bijit from the back, she remembered that he was an ox. That little skin in the middle of the white was his hump for her. His jet black hair stood in curls all around his fair face. She wanted to know what it would be like to tug at some of those.

In the bedroom, she kept the TV. The cable was connected to it from the corridor all the way through the main door. Everyone in the Block got their cable connections fixed along the corridors. She disliked the black wire against the cream coloured wall, but she loved the TV.

She perched at the corner of the bed and switched it on. In a moment the blue screen came alive with the picture of a hero sporting a new motorcycle.

Parul’s face darkened. Bijit had a scooter. She went around the city sitting behind him, holding on to his waist. It was very romantic. She thought of the motorcycle as more romantic though. On it, she could at least lean on the man in front.

She pictured Bijit riding a bike. It flitted away. He was always serious while on the scooter. He concentrated on the road, hardly talked over his shoulder. He always knew where he was going.

The other day, they had gone to a shopping complex for window shopping. Parul had insisted:

I want to look around. I have not been out of doors for more than a month now.

Where do you want to go? I’ll take you out in October.

It’s not cloudy today. In the evening, we can go to the market. I am not talking about sightseeing.

Whatever you want, just tell me. I’ll bring.

I don’t want anything. Just want to stroll about a bit. For a change.

So now you want a change? When I told you about the project at my office, you refused.

I don’t want to work!

I mean, not now. I want a lot of other things first.

You are wasting away your time. You don’t do anything throughout the day.

I prepare lunch, she said sullenly.

That takes hardly an hour. We can do without it. There is no need to stay at home for lunch. In the office, there is a very good tiffin service … and a canteen for change of taste.

Saying this, she had walked out of the bedroom and into the balcony. It was not yet dark. Bijit considered the things at stake and then conceded, adding ‘Only to stroll’.

Parul avoided asking for anything to purchase. She had this strange notion that they needed to save up for an unknown future. Again, an unusual thought. She felt as if, some calamity was in store for them. A huge expenditure was inevitable. It was building up and for that strange irrational expenditure ahead, they must save every rupee now.

It was not the same as earning. She felt no compulsion to earn. She recalled her mother’s words often,

Don’t take up a job now, Parul, get settled first! Wait for the degree. This is the best time to conceive a child. Afterwards with your degree in hand, getting a job would be even easier.

And it sounded so rational. Parul could not disagree. She loved her mother’s advice.

Advice came from other quarters too. A year ago Bijit’s grandmother had rubbed her slender back affectionately and said,

My child, it is not right to stay alone for long.

You know what I mean, my dear. It is all in your hands.

Parul was perturbed, ‘all in my hands’ she reflected. If it was really in her hands, she must control it. As a result she refused to earn.

“Hello Mr. Murty …” phoned in Sadanandam, the General Manager of ABC bank. “We have reviewed the … END_OF_DOCUMENT_TOKEN_TO_BE_REPLACED

If ever you go to Laxmipuram and ask for the house of Veera Venkata Satyanarayana garu, nobody will … END_OF_DOCUMENT_TOKEN_TO_BE_REPLACED

Sir, I assure you and I repeat it for ten times: "I am not MAD" … "Though I am not looking in a … END_OF_DOCUMENT_TOKEN_TO_BE_REPLACED