Fatima Siddiqui, PhD Coursework Student, Department of English and M.E.L., University of Lucknow. In her own words, "As a literature student, I have learnt that everything in the world is capable of teaching us something. Words are extremely powerful and I believe that the right ones are capable of making all the difference. So, I write to express what I feel and understand that which puzzles me. I write to imagine things the way they should be and because there is nothing more liberating than the freedom of expression."

My mother’s pregnant belly feared that God will announce a girl that the neighbors will refuse to celebrate and her father will ask for more but my mother’s fragile heart skipped a beat in sync with mine when she heard my father whisper the adhan* into my ears. *Adhan is a call for prayer that Muslims recite in the newborn’s ear. … END_OF_DOCUMENT_TOKEN_TO_BE_REPLACED 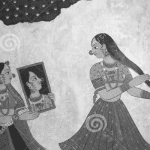 The majority of Anglophone fiction in India in the 1950s and 1960s was based on the questions of nation and history. The Indian English writers were preoccupied with either partition narratives or national allegories. (Gopal) There were very few novels which could be described as ‘domestic’ fiction (meaning novels which were set in a domestic atmosphere and were concerned with … END_OF_DOCUMENT_TOKEN_TO_BE_REPLACED