You are here: Home / Archives for Aditi Jain

Aditi Jain is a writer, based in New Delhi, India. She received her Bachelor's Degree in Textile Design from the National Institute Of Fashion Technology (NIFT). She has documented and worked with master textile artisans and craftsmen.

Presently, she is pursuing her Master's in English Literature from Hindu College, University of Delhi (DU). She is at work on her debut novel, under the working title 'Unspoken Threads'. Her work reflects on the themes of colonialism, melancholy and conjugal life. 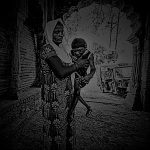 Aasha wrapped the leftover rotis from last night's dinner in a faded, tattered cloth. The cloth seemed to be yielded by a worn-out lungi. The part of the rotis, which were over-baked, visible from the frayed patches, looked like black pustules on pale skin. She kept the thin wad in the outer pocket of Raghu's basta, rolled over its rugged canvas upper flap, and pressing the basta at its various panels, fastened the latches. Her hand span, while fastening them, was no less than a complacent yawning mouth, with the thumb on the upper flap and forefinger on the latch. The muted click sound of those shoddy aluminum latches was enough to balm her frowning forehead. She slung the bulging basta over her feeble shoulder. The strain of the rugged canvas strap was enough to prop a nuanced shallow chasm among the loosely gathered pleats of her pallu. Those pleats were the trough to the peaking ghoonghat, which was no less than a sand dune when casting a closer glance. Her eyes, which looked chronically jaundiced, were veiled, for they would itch inexorably, and the resulting purplish puffy tear duct with scarlet tear line rimming the yellow sclera was a nightmare in daylight. [Read the rest...] “Wobbly Shades | Aditi Jain”

“Hello Mr. Murty …” phoned in Sadanandam, the General Manager of ABC bank. “We have reviewed the … END_OF_DOCUMENT_TOKEN_TO_BE_REPLACED

If ever you go to Laxmipuram and ask for the house of Veera Venkata Satyanarayana garu, nobody will … END_OF_DOCUMENT_TOKEN_TO_BE_REPLACED