You are here: Home / Nonfiction / AJAYA Book I | Roll of the Dice | Anand Neelakantan

Indian Review | AJAYA Book I | Roll of the Dice | Anand NeelakantAfter thousands of years, a new light shines on the Great Epic of India.

Bestselling author, Anand Neelakantan’s second book, AJAYA Book I – Roll of the Dice, is the story of Jaya, or the Mahabharata, as we popularly know it. But there lies a twist. While history is written by the victors, the losing side is condemned to silence. But Ajaya – Roll of the Dice gives forceful voice to Suyodhana (ignominiously known as Duryodhana) – Crown Prince of Hastinapura, his Kaurava clan, and his band of loyalists, who fight unto death for what they believe in.

The book begins with the Kauravas and Pandavas as children, each gradually displaying the temperament and skills which are to play such a large role in future events. Bheem is muscle and brawn but little brain. Suyodhana is passionate and stubborn, to the point of foolhardiness. Yudhishthira, the eldest Pandava, is imbued with Brahmin ideologies and superstitions. The plot thickens as the Princes grow up together in the Hastinapura palace, always shadowed by the conflicting ambitions of their powerful mothers and bound by the strict Kshatriya code imposed by Grand Regent Bhishma. Pawns of destiny in the hands of vested interests, the cousins and their allies move inevitably towards internecine conflict and ultimate chaos.

Guru Dronacharya is usually perceived as the great warrior of Brahmin heritage. But here we also see his feet of clay and his rigid ideologies which make him both vulnerable and arrogant. Indians are familiar with the story of Ekalavya and his yearning to become a skilled archer under Drona. Ultimately, Drona asks him to chop off his thumb as gurudakshina. What is not usually related is why the horrific request was made by Drona. He had promised Kunti he would make Arjuna the best archer in the land. But Ekalavya, a poor Nishada (low caste), stood in his way. The Kurus held Drona’s own livelihood and his son’s future, in their hands. These considerations drove Drona to steal Ekalavya’s gift and bestow it on Arjuna, a Kshatriya prince.

Anand Neelakantan beautifully portrays the mindset, lifestyle and caste domination of the Mahabharata time, dexterously interweaving a series of pre-battle events and confrontations that eventually coalesce in unfolding the dramatic tragedy. Conventional narrations of the Mahabharata overlook facts he has skilfully incorporated into the narrative: Arjuna was not the first or only one to hit the eye of the fish at Draupadi’s swayamvara – it was Karna, King of Anga; Krishna fostered hatred towards Suyodhana and love for Arjuna, in his sister Shubadhra’s heart, so that she rejected one to marry the other; based on Vedic law, a woman could marry four men, beyond that she was considered a prostitute. But, to prevent strife between the Pandavas, Kunti turned a blind eye to this law and Draupadi was compelled to become the common wife of the five brothers. 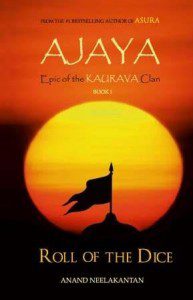 The book shows Suyodhana questioning the norms which uplifted a few and banished the rest to poverty, to survive on the whims and fancies of the superior castes. In a rare and clear-eyed portrayal, the book shows him as a man of unwavering convictions. Even when Arjuna steals his first love, Shubadhra, he does not retaliate, realizing it to be her wish and not his cousin’s. Suyodhana is depicted as a man who unflinchingly believes that merit and not caste ought to be the basis of education, reward and recognition. He stands alone in an age of conventional behavior. At a supreme moment in the book, during the graduation ceremony, when Arjuna refuses to duel Karna because of his caste, it is Suyodhana who breaks every norm and faces down the ire of both the nobles and priests, to elevate Karna to become King of Anga, and Arjuna’s equal.

Shakuni, Prince of Gandhara, the mastermind behind the family feud, is portrayed with the nuances usually missing from conventional narrations. Vividly, we see how his burning desire to wreck revenge on India, just as Bhishma destroyed his own country of Gandhara and abducted his sister, Princess Gandhari, to become the wife of blind Prince Dhritarashtra of Hastinapura, drives every move he makes. Astute and intelligent, he suggests that Suyodhana challenge Yudhishtra, a gambling addict, to a game of dice. Playing with loaded dice made from his father’s bones, Shakuni wins for the Kauravas, many times over, until the Pandavas lose everything – land, property, caste, and even their common wife, Draupadi. The book ends with the command for Draupadi to be brought before the Kaurava Clan. Her fate lies in their hands.

The narration continues in AJAYA Book II – Rise of Kali, to be released in 2014.

“Hello Mr. Murty …” phoned in Sadanandam, the General Manager of ABC bank. “We have reviewed the … END_OF_DOCUMENT_TOKEN_TO_BE_REPLACED

If ever you go to Laxmipuram and ask for the house of Veera Venkata Satyanarayana garu, nobody will … END_OF_DOCUMENT_TOKEN_TO_BE_REPLACED

Sir, I assure you and I repeat it for ten times: "I am not MAD" … "Though I am not looking in a … END_OF_DOCUMENT_TOKEN_TO_BE_REPLACED