Only a handful of people attended the funeral though the dead person belonged to the same village and known to everybody there.

He did not know anyone. He had expected at least a few familiar faces. There was none.

After the simple religious ceremony of cremation, he was about to leave the place, when Murali asked him: “Uncle, should you leave at once? You have come from a far away city and you are visiting us after many years. Please eat with me, for mother’s sake.” 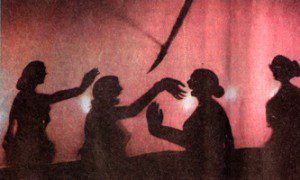 The day was dying.

The flames of the setting sun were burning out.  The night seemed at hand.  The funeral pyre at Chandalakunnu also must be dying out.

The house bore a deserted look. It did not appear like one where a death had occurred a few hours ago. There was no sign of mourning; no kith and kin of the departed were present.

During the dinner, he politely inquired:

“Where were your grandparents?”

“No. I didn’t inform him.  Mama never wanted to. But she had asked me not to chase him out if he ever turned up for the funeral.”

“Why did you take the trouble of telephoning me?”

“It was Mama’s last wish. ‘Inform uncle. He will surely come. Offer him a meal in my name.  We should be grateful to him.’  Mama had insisted.”

The rice ball dipped in the chicken curry and pushed into the mouth got stuck in the throat. He suddenly took a couple of sips from the glass filled with sweet toddy, specially brought for him. Still he felt choked. He coughed twice. He experienced undue pressure on his chest. His heart was heavy. He knew sincere love and honest care could not be paid for.  The dues remain if the services rendered were genuinely selfless. He could never chase away the sense of regret from his heart. It had been with him all these past years. He had wanted a cure once for all.

His son had married a foreigner and migrated to the Far East. By the time his wife had died, his daughter also had eloped with her sweet heart, a computer-wiz, settled in Delhi.

The deck was clear. The house was empty.

He then sent word, “Ramani, I am alone and out of sorts. Please come.”

What had prompted him? Was it the longing of a solitary soul? Was it the exuberance of a memory of by-gone days? Or were the demands of advancing age? He was not sure of any one particular feeling. It might be a combination of all. Or a combined human urge, a basic instinct.

Ramani did not turn up. She did not even respond to his SOS. Her silence did not annoy him. He did not feel bad about her.

It was a relationship that had sprouted fifteen years ago. It lasted only for three years, but had the impact of a life long bond.

His marital life was already on the rocks. Ideological differences and attitudinal disparity had replaced the initial feverish romance. What were insignificant became important and contentious issues to quarrel upon for both. Ego clashes and personality conflicts became the order of the day. The children became waves between them. Nobody wanted a divorce for fear of society, but a temporary separation seemed to be a welcome compromise. An opportunity presented itself when his wife was appointed as the chief matron of a military hospital in Saudi Arabia on Government deputation. She grabbed the chance and left, leaving the children with him.

In the mad mad city of Mumbai with a daughter of four years and a son of six years and himself, a busy journalist, he had soon found it impossible to cope with the added strain and stress. He needed someone to care for the kids and home. He searched for a housemaid without encumbrance in his hometown. He had spread the word among his friends. The search failed. He couldn’t find one. He gave up hope and decided to face the challenge.

Then suddenly and unexpectedly, as if arranged by fate, a middle aged woman from a Nair Tharavad responded. She had disclosed her current predicament to him. On his part, he had explained to her, his situation. She was willing to take up the job with risk. Her acceptance was total and her offering was unconditional.

Within a couple of weeks, she proved herself an expert in the art of house-keeping, though an illiterate hailing from a village town in Palakad. She performed the duties of a mother to all. Though a servant, she functioned like the lady of the house, responsible, responsive and caring. She was docile and simple at heart. She never gave room for argument. She spoke softly. Outside the home, her behavior earned love and respect among the neighbors. She was no busy body. She never gave a chance for gossip and misunderstanding among his friends.

The children loved and adored her even though they had sometimes argued with her. He too regained vigor and vitality both mentally and physically.

Ramani’s face was evidence of her inner peace and contentment. Her son became the ‘sweet and sour’ of the home life.

After a gap of three years, his wife returned from Saudi Arabia, schooled by the harsh time and tide of the desert. In the mean time, his restless mind had been tamed and tempered.

The home-coming was a happy one.

At the end of the month, Ramani said very simply and very quietly, “Sir, you don’t need my help any more. I don’t want to be the source of unwanted worry and anxiety for your wife and for you also. In course of time, we might be burden to your family. Madam has taken us in very kindly and with much understanding. But now, I want to leave.”

Ramani’s blunt disclosure surprised everybody at home. She was too willing to withdraw, resign and go on her own way. He then asked, “Why should you want to return to the hell where you came from?  It would very unwise that you go to the very people who had stoned and cast you off?  I think it is better for you both to stay here in a safe haven and pursue the future, if you do not want to stay with us. You shouldn’t go.”

His wife had also suggested her that they could stay. The children too had pleaded with her.

But Ramani would not listen. She had decided to leave. She was adamant. Why? He did not know. He would never know.

He gave her whatever she had asked for. Her demands were moderate. She had deserved more, much more.

Ramani and her son left without ceremony.

Why didn’t he compel her to stay? He could have easily blocked her way back to the blind alleys and muddy waters of Palakad. He didn’t.  Why?

“Uncle, what are you thinking about? What is bothering you? Everything is over now and well. Please eat.”

Suddenly, a question with no logic snaked into his heart.

“Murali, did you ever know that your mother had a wish buried deep in her heart?”

“Yes.  Mama had longed for a child from you, a brother or sister to me. It was only a dream.”

“I knew your mother never misused the freedom I gave her. She did not betray my trust in her. It was she who had taken utmost care not to become pregnant again. She had daily taken her pill religiously”

“But you provided for us generously and liberally. We got a lot of love and care from you and from your children. What else had we needed at that time?”

At these words, his eyes filled with tears. His heart ached. He cried in silence.

He stared at the ceiling for a long time.  He could feel, smell and touch the presence of Ramani, the woman.

He ate a handful of rice. He emptied the glass and got up.

While he was puffing at a cigarette he abruptly inquired:

“Murali, about five months ago, I had sent a letter to your mother. Why didn’t she reply?”

“It was an unpredictable situation at that time. Mama was very much confused and undecided. Though she did not know reading and writing, she had kept your letter under her pillow for two months. Then on a full moon day, she tore and burnt it. I saw her weeping.”

“Why did she keep silent? Was she feeling ill of me? Did she hate me?”

Murali did not answer promptly.

He remained lost in deep silence as if groping in the dark for words.

Then he spoke slowly: “Uncle, Mama never wanted to leave you, but she had no choice. After our return, Mama was still looked down as an unwanted woman, rejected by her relations, ostracized by her caste for the crime of loving and bearing a Muslim’s son. The neighbors condemned her. But nobody dared to call her names at her face. Mama was a proud woman but simple at heart. She had no regret for her past love affair or for having stayed with you. She never complained. For livelihood, she did not beg nor stoop. She worked day and night at the kitchens and dining halls of temples and Kalyana Mantapas.  But many of the godly men took advantage of her. She could do nothing. One day she fell ill. There was no cure for sickness. By the time your letter reached, she was dying. She has resigned to her fate” Murali then broke down.

These were revelations to him. He felt explosions within. Volcanoes erupted inside. Yet he appeared calm and composed. The sense of regret deepened in him pricking fierce and intense.

No one spoke for a long time.

Moments of deep silence were trickled by.

Finally Murali said, “Uncle, be assured, Mama was happy and content when she breathed her last on this piece of land you had helped her to own. She always remembered you with love and respect.”

“Ramani and you never asked for anything, never told me about what was going on here.  Why? I don’t know. My gates are open to you, my heart too. It was so always. I should leave now.”

He got up and walked towards the gate and into the deserted street.

The night was hot and humid; the sky was pale and pallid.

He saw the blinking of a solitary star near the palsied moon.

Author Profile : J.Kaval, pen name of K.L.Joseph, writes both in English and his mother tongue Malayalam short stories, novels, essays and book reviews since 1960. He is a graduate in theology, philosophy, postgraduate in Sociology, and diploma holder in Journalism. He has been featured in India and abroad by literary journals. He is the editor and publisher of Katha Kshetre, an international literary journal published from Bangalore since 2000. He conducts classes on creative writing, teaching and journalism. He can be reached at www.joseph.kavalatgmail.com
Authors : J.Kaval ( K.L Joseph )

J.Kaval, pen name of K.L.Joseph, writes both in English and his mother tongue Malayalam shoert stories, novels, essays and book reviews since 1960. He is a graduate in theology, philosophy, postgraduate in Sociology, and diploma holder in Journalism.

“Hello Mr. Murty …” phoned in Sadanandam, the General Manager of ABC bank. “We have reviewed the … END_OF_DOCUMENT_TOKEN_TO_BE_REPLACED

If ever you go to Laxmipuram and ask for the house of Veera Venkata Satyanarayana garu, nobody will … END_OF_DOCUMENT_TOKEN_TO_BE_REPLACED