You are here: Home / Fiction / The Noose | Naresh Kumar 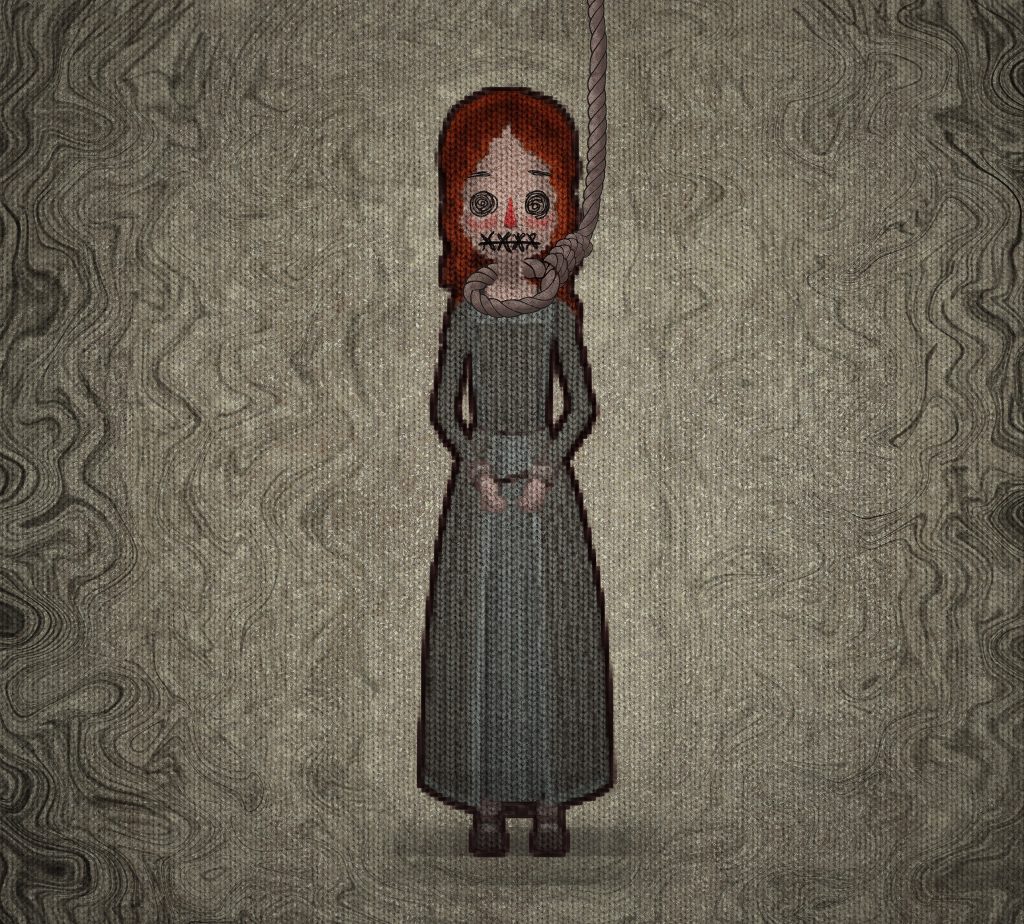 The noose was fashioned from a thin, jute rope; it dangled from the old oak tree that marked the middle of the city’s square. The King’s soldiers circled the noose and the tree, their shields high and their spears sharp. A large, quiet crowd filled the square beyond them, swaying sadly to the tune of the day’s warm breeze, not unlike the noose itself.

The old man had not seen so many people gathered in the city’s square. Not in a while, at least. And none so quiet. A sense of sadness filled the air, he saw. People looked anxious, impatient. They shared mutedly the gossips they had heard. They spoke haplessly of how they had feared this day’s realization. Little boys sat on their father’s shoulders, staring dismally at the noose. Little girls clung to their mothers’ skirts, asking them if anything could be done to stop it all.

“The girl has been called a witch,” he heard a soft voice in the crowd. “The King declared it himself.”

“She’s just a girl. No more than ten,” he heard someone whisper back.

“They’ve found her guilty of arresting people’s minds with her magic.”

“Magic? But she only sings.”

“They said her voice is evil. They said it’s magic.”

“They said she cast spells with her songs on everyone in the King’s castle. Even the Prince and the Princess are supposedly under her spell.”

“All lies,” a voice protested. “My cousin who works in the castle’s kitchens told me that the King wants her dead.”

“But why? She’s an innocent little girl.”

“He’s jealous,” the answer came. “The King doesn’t like how everyone in the castle loves the girl more than him.”

“But why weave a story that the girl is a witch? He could just as easily have her thrown out of the kingdom.”

“And let her live to tell the world how jealous he was of her gift? What king would like to be known for his envy for a little girl?”

What king indeed, the old man agreed. He pursed his mouth and looked at the oak tree and the noose that dangled from its branch. He pushed on ahead towards the tree, one limping step after another.

By the time he stood before the tree and the noose, he felt his arms tire and his pits ache. He wiped off the sweat that grew on his brows and looked to the sky from behind the shade of his palm. Vultures circled above the square like they knew they were about to witness a great tragedy.

Then the echoes came.

All eyes in the square turned westward, to the drums that led the march. All eyes grew eager, searching for the girl they came to see. Whispers simmered, slowly, steadily, but never amounted to much. The drums, like the King’s command, proved too loud and too harsh for anything else.

Soldiers marched in twos, their feet moving to the drums’ beats. Four horses dragged a wooden wagon behind them. The wagon’s wheels jerked with every turn, quaking, like the soldiers, to the tune of the drums.

The drums stopped when the wagon halted by the oak tree. In the quiet that replaced the drums, a warm wind whistled through the square. Leaves on the oak tree rustled darkly, screaming for what voices in the square stayed silent.

The old man watched the wagon’s doors open. He watched a small, skinny man emerge from it, hair slicked with oil, eyes drowned in kohl, lips large and wide and eager. The man climbed down the wagon’s steps and then climbed up the dais raised for the noose. He took a moment to gaze at the crowd, preparing his words.

“A great evil has come upon us! A great evil!” The man’s voice was oddly large for his small, skinny frame. “It came guised in innocence. It came guised in beauty. It fooled us all with its tricks, its games, and then it plotted a great doom on us all. But now, this evil has fallen to us, its lies exposed, its plots revealed. It has fallen to our will, our grit. And today we give this evil the ending it deserves.” His eyes circled the crowd again before he nodded to a soldier by his side.

The old man felt his arms prickle as the soldier marched to the wagon. He felt the air grow stiff. Whispers echoed around him, all frothing with anxiety. This anxiety became gasps and sighs when the little girl emerged from inside the wagon. Above, in the sky, vultures cried again.

The girl was bound from head to hip, her hands tied, her mouth gagged. Iron cuffs clasped her ankles. Iron chains coiled her arms. Her wrists were pinched behind her in shackles that had cut through her skin and turned it red.

She walked to the dais in slow, staggering steps, her disheveled hair fluttering with the breeze. The soldier behind her prodded her on with the blunt end of his spear as if she were a leper, or perhaps something worse. She tripped a step and fell. Gasps filled the square.

The old man watched the little girl, his eyes moist with sorrow, his gut hot with rage. You do not deserve this; he thought. “Lies,” he heard a whisper behind him.

“But now, she has been proved a villain. There is no doubt in the eyes of the King and in the eyes of the gods that this girl — this innocent-looking girl — is in fact a creation of foul creatures.” The man paused to watch the girl climb the dais. “Look upon her. Look at her innocent little face. Look, but don’t be fooled. The devilry that hides behind her face is beyond our wildest understanding.”

A quiet followed the small, skinny man’s words. The girl stopped when she stood below the noose. That was when the first stone flew.

The stone rushed at one of the soldiers circling the tree and the noose. It struck his shield and sent a loud ring. “Liar!” a voice screamed from the crowd. And then chaos followed.

Stones flew in tens, in hundreds, and turned the sky dark. They crashed upon the soldiers like waves in stormy waters. The soldiers, in turn, held their shields high and their spears out.

But the crowd refused to relent. Calls and curses sprang like weeds through the square. Stones and vulgarities flew in equal measure. “She’s no witch!” people screamed. “Free her!” they bellowed. Stones rained so furiously that the small, skinny man rushed down the dais and hid behind the soldiers’ shields. The soldiers, now circled, could only stand and resist. And the crowd, in turn, kept pressing against them as one.

The old man found his chance then.

He slipped his crutch under a soldier’s feet; the soldier, too busy fending off another man, had paid the cripple no notice. The old man pulled his crutch and toppled the soldier, breaking the wall their shields had raised.

The crowd broke through this fractured wall and drowned the soldiers all at once. They robbed the soldiers of their arms and struck at them with deathly blows.
The old man saw the girl on the dais still. He saw the noose swinging above her. He hobbled with his one good leg and his one good crutch to the dais and hurried up its steps.

The girl, he saw, was shivering. He saw tears in her bright blue eyes. He held her cheeks in his hands and smiled. “It’s all over,” he said. “You’re safe now.” He undid the cloth that was wrapped around her mouth. “You’re safe.”

“Fool!” a voice screamed at the old man.

Behind him, the small, skinny man tried to climb the dais. He tried to grab the cripple’s leg. But he stopped when the old man pointed the sharp end of his crutch at him.

The old man spat at the small, skinny man. “The King’s pride will not kill this innocent girl,” he barked. He looked back at the girl, at her bright, blue eyes. “You’re no witch,” he said and removed the cloth that was stuffed in her mouth.

Weak and weary, the girl nearly fell. But the old man held her safe. She coughed once, twice, her face buried in his arms.

“It’s alright,” the old man said and ran his hand over her head. “It’s alright.” He helped her to her feet and raised her chin to look at her face. His face, in turn, when he looked at her, grew white.

“You fool!” the small skinny man yelped from behind. His eyes were wide with panic. “What did you do!”

The girl looked at the old man, smiling. But the bright and the blue of her eyes was gone. In their stead was a black, darker than a moonless night, swirling dangerously. The black in her eyes lowered to the chains that bound her. The chains, in an instant, turned to dust and disappeared with the day’s breeze.

“No,” the old man gasped. “NO!” He took a step backward and fell off the dais.

The girl watched the old man writhing on the ground below. She smiled at him, her eyes now drowned in black, her face drowned in its sinewy shadows. “Thank you,” she said to the old man. Her voice came sweet as honey. Those blacks then looked to the rioting crowds and her voice started to sing her song.

In the sky, vultures screeched one last time.

Naresh is a writer based in Bangalore, India. He predominantly writes in the fantasy genre and is currently working on his first novel in the same space.

“Hello Mr. Murty …” phoned in Sadanandam, the General Manager of ABC bank. “We have reviewed the … END_OF_DOCUMENT_TOKEN_TO_BE_REPLACED

If ever you go to Laxmipuram and ask for the house of Veera Venkata Satyanarayana garu, nobody will … END_OF_DOCUMENT_TOKEN_TO_BE_REPLACED

Sir, I assure you and I repeat it for ten times: "I am not MAD" … "Though I am not looking in a … END_OF_DOCUMENT_TOKEN_TO_BE_REPLACED