You are here: Home / Fiction / More than a Scooter | Adarsh B Pradeep 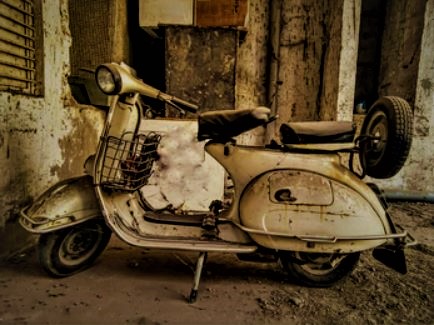 ‘He’ joined our family when I was 10 years old. My father told me and my sister to wake up early for the Vahana Puja (a ritual performed by Hindus when a new vehicle is bought). I was thrilled, not for the Puja but for the coconut and the Prasad (Offering made to god that is consumed after the Puja) that followed.

It was a chilly morning. The air was heavy with mist, morning birds chirping all around and the streets were void of any vehicles, save for a few joggers. My sister and I flanked our father. With me in the front of the scooter, like a little prince, all proud about his Rath Yatra (Procession in a chariot).

The mosquitoes kept us in the company till the Puja was over. My sister and I turned into a snake and a mongoose once the priest gave us the Prasad. I could see that my father didn’t share the enthusiasm that enveloped me and my sister. He was sober as a judge. I said to myself- ‘the grown-ups have too much to worry about’.

My father had sold his Chetak scooter the week before we bought the new scooter. The Chetak was a gift from his father. The 10-year-old boy was too little to get this sense of bonding.

After running back from school, I would mount on the scooter and rock it back and forth. I felt like riding a pony. ‘He’ was a toy for the 10-year-old.

It was on ‘him’ that my mother learned to drive. ‘He’ was a stallion when my father drove and a tortoise when my mother drove. ‘He’ accompanied my mother to work and waited until she was done, accompanying her back. ‘He’ was a reliable caretaker to my mother.

On some days ‘he’ accompanied my father to work. ‘He’ moved through the traffic effortlessly, like a fish in the water. He made sure that my father was never late for any meetings.

When my sister learned to drive, ‘he’ became the hero who mingled with the bashful boys and girls at her college.

‘He’ reluctantly obeyed me when I forced ‘him’ to accompany me to my tuition classes, even though the 17-year-old didn’t possess a driving license. That was the first time he got a bruise. The bruise that the over-confident and underperforming driver in me gifted to him. ‘He’ minimized the bruises with ‘his’ crash guard and saved me from my father. ‘He’ was a trusted friend to me.

When my father passed away, ‘he’ was running throughout the day, just like how a loving son would, arranging things, making sure everything is okay, and appearing strong despite the storm inside.

Today when I sold ‘him’ for Rs.7500, my heart sank. Being 20 years old, ‘he’ is not the stallion anymore. ‘He’ struggles to come to life. And when ‘he’ does, he constantly coughs. The ‘doctors’ say that ‘he’ is dying of old age, that there is nothing more to do.

‘He’ was more than a scooter- a toy, a caretaker, a trusted friend, a loving son, a supportive brother. ‘He’ always became what we wanted ‘him’ to be.

As ‘he’ was driven away from me today, I was sober as a judge, tears stinging the back of my eye. But I resisted and appeared strong despite the storm inside, like how a brother would. My 2-year-old son holding onto my little finger smiled at me, probably thinking that the grown-ups have too much to worry about.

Adarsh is a journalist and an aspiring writer. He works with a leading English daily in India and his works have appeared in several newspapers and magazines. He lives in Cochin, Kerala, India, with his wife, mother, and his five-month-old son.

“Hello Mr. Murty …” phoned in Sadanandam, the General Manager of ABC bank. “We have reviewed the … END_OF_DOCUMENT_TOKEN_TO_BE_REPLACED

If ever you go to Laxmipuram and ask for the house of Veera Venkata Satyanarayana garu, nobody will … END_OF_DOCUMENT_TOKEN_TO_BE_REPLACED