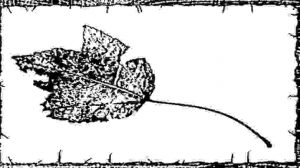 “Go on now, nobody needs ya ‘round here.” groused Whitman as he spoke to the wind that rattled the length of a row of Beech trees and then rolled along to wrestle with the nearby Southern Red Oaks. The dry tree leaves crackled amidst the rustle. With no shield to resist, many simply gave way to the force of nature and the consequence of gravity. Whitman recognized the strange beauty of death as the leaves blanketed the fields near the Duck River where they would surely crumble and absorb into the rain-soaked soil, becoming one with the earth.

“Coulda’ loved this place if’n I weren’t forced to be here under the circumstance.” sensed Whitman as he pondered the pastoral setting of the Tennessee landscape in June. Nearby, a Mockingbird bullied a Pileated Woodpecker and together they competed for superiority, urged by the impetus of the wind.

Whitman remained prostrate as he lifted his head from the stone pillow, with a threadbare blanket-roll bunched on top as sparse comfort for the sleep of the just. He slowly, but methodically, surveyed his surroundings and realized he was alone. To his right lay a ration of whiskey. The unbuttoned flap of his haversack revealed an ear of parched corn, already discovered by a colony of ants, and a grimy handkerchief tied loosely in a four-corner knot that was filled with sassafras tree buds and bark. Gone were his Confederate issue Enfield Pattern rifle, cap box, water canteen, and his shoes.

“Well let me say thank ya’ to my own Company G, and to that God forsaken Cap’n Faulkner, for this abundance and for chuckin’ me off the sick-wagon to be left behind in a sorry state with fever.”

The misnomers War of Southern Independence or War of Northern Aggression were merely words on a piece of paper that no longer held meaning for Whitman. But killin’ another man on a battlefield or bein’ killed-there was a meaning in that. The core of him wanted to enter the Duck River, not to wash away the literal or figurative stain of war, but to allow the swift current to exact his fate-to fight no more.

“Name and hometown?” quipped the captain sitting at a make-shift table in a shady area under an old oak tree at the town center in Bolivar. He wore a fitted gray-wool shelljacket with gold-colored buttons, a stiff collar, and three rows of one-quarter length gold bars on each side.

“Whitman Edwards, hometown’s Valletarand.”Whitman could read and write as much as his homeschooling would tolerate, but he couldn’t decipher the words written in cursive on the dirt-stained registration paper. The captain glanced up at Whitman and in less than a minute summed him up and added the physical description of about twenty-four years old, five feet eight inches tall, fresh complexion, auburn hair, and hazel eyes.

“Bid farewell to kith and kin. Report here February 24th with at least a shod horse and any gear you have that might be useful.” The Captain sat listless and stupefied as his eyes moved along the growing line of men and boys, some as young as fourteen, choosing enlistment over conscription, or an appointment with the hangman’s noose, under the declaration of martial law. A paltry five days after the February 3, 1862 Texas secessionist legislature requisition, the Confederate rolls were bolstered.

The old town clock struck noon as a cluster of tightly knit clouds separated, like dread-messengers, fanning out across the sky toward the faraway horizon.

“Boy, don’t you know that one Confederate soldier can lick ten Union men?” and “Pshaw! Be over in less’n three months cus’ Yankees is cowards.” were the hollow words of comfort delivered by the community to those preparing to wear the Confederate gray for their first roll-call and orders to muster.

Whitman was haunted by the ghosts of the men who’d been hung in camp three days ago. Captured Company G deserters- men he’d mustered with, fought alongside, and depended on. None of the men put up a fight nor said a word for theirs was a sorrow without hope. They closed their eyes forever, as penance for the crimes pressed upon them.

“Oh God!” boomed an anguished voice that resonated through the expanse of soldiers layering the over-grown fields at a farm due north of the Arkansas River close to Arkansas Post. Crouched or sitting along the length of a split-rail fence were Whitman and scores of other Privates in the Company. Weary from the first long march since losing his horse to a mid-ranking officer, Whitman had lifted his rifle at an angle and used the front-edge of the butt against the ground to hoist himself erect. The rifle became tangled in the bramble, tugging on the hammer and forcing the loaded gun to discharge a round. The whiz and ping of the ball was a familiar sound and the wounded Private seemed to stumble and fall in slow motion, like a wheat chaff at harvest.

“Sharpshooters!” shouted several of the men as they grabbed rifles and scrambled for cover, hoping to gauge the location of the intrepid shooter.

Writhing in pain by the dead-reckoning of the minnie-ball in his back and through his lungs, the soldier pitched a tremendous death-roll and then gave up the fight for the eternal sleep. He appeared to be guarding his pocket bible that lay with him on the ground. Under the fingers of his right-hand, the open flyleaf exposed the handwritten words if we never meet again in this life, let us all meet in the next, Mother.

Each Company in the battalion was benumbed by the happenchance death of the soldier. Having killed one of his own, Whitman couldn’t feel his soul and he believed his spirit had acceded to a depth below ground-level.

“Reconciliation often comes late after the notion of a lost-cause but there’s heartache in the realization.” Whitman determined soon after enlistment that neither Confederate Law nor Union Law came close to God’s law. Early in the war, a more excellent way of behavior acceded to barbarism and savagery.

Texas folklore insists that the embrace of a cool breeze is obliged to deliver a fond memory. In an instant, Whitman cheated time and outwitted distance to travel the eight-hundred miles from Tennessee to his family home in Texas.

Hot-stone johnnycakes swimmin’ in bacon grease and corn porridge cooked in the open hearth of the mud chimney fireplace. Whitman reminisced about the aroma of a homemade, fresh breakfast radiating through the small, wood-frame house. The figures of his mother and father, brother and sister seemed physically close yet they were cast in thin shadows. Their faces and physical features were blurred, but his love for them was clear and constant. He divined the warmth and security that he’d often taken for granted.

The breeze met the obligation, then quickly released its grip as it gathered the essence of the memory and then rambled along. Whitman supposed it had a lot of territory to cover, but he’d appreciated the mixed blessing of the sacred experience.

“Lean on the everlasting arms of Jesus. Your loving mother until death.” ended the letter written by Whitman’s mother Nancy. It was the only letter he’d received and the worry about his folks was relentless. The paper was whisper-thin and the writing was made with a soft, homemade graphite pencil. Whitman kept it folded in quarters and read it often. It was yellowed, stained, and the words were beginning to disappear from the pages, like a fading memory. The letter was kept in a pocket he’d sewn on the inside his tattered shirt, facing his left breast and next to his heart. His name and hometown were crudely stitched across the same pocket, in case the worst happened. The odds were against him; brutality, a general misery, and hunger were his unenviable companions.

“Lord, finish this war so’s I can go back home and forget about this mess.” Before the sentence was complete, Whitman was awash with the knowledge that it would take one thousand years to forget what he’d seen and done in the war. Temporal relief came with the adrenalin during the chaos of the fight, or in the uncertainty of a rapid fallback.

Whitman recalled his last bout with remittent fever that had caused him to be left behind on the march from Wartrace on the road to Tullahoma. Rain had dogged the region for days as the dismounted cavalry made a slow progress through the inches-thick mud. Rhubarb Root in a cup of boiling water was the only available treatment for the symptoms of fever.

“Saw the fever come outta the fog after the last killin’ time.” Whitman retained the vision of a translucent fog lifting from the ground, appearing as a mist across the spring. The morning air was cool but rancid with the smell of gun powder smoke, and death. The odor of sulfur from the spring near Wartrace added to the caustic layers of scents and caused the remnants of Company G to be overcome with nausea.

Light as a feather, Whitman began to pull himself up off the ground where he’d been left in a semi-conscious stupor. The covenant with death had abated and its overwhelming scourge was nullified.

“No smell of gunpowder, no smell of death, and no bother.” noted Whitman surprisingly. Whitman recognized that the sun, directly overhead, appeared ablaze in a spectrum of yellow, violet, red, and blue. The colors pulsed in rhythm, like the meter of a distant drum-beat, each vying for the forefront in the spectacle. The gap between earth and the heavens, where the sun rested waiting for the earth to catch up in orbit, was replete in a marvelous azure.

“Due time to try to catch up with those that left me behind or they’ll be a reckoning one way or t’other, by Yank or a Southern born.” Woefully, Whitman started for the road toward Tullahoma to find his own Company G or another Company in his battalion or regiment. Advancing but a few steps, he turned around to fetch the scant supplies left for him as he battled the fever.

Completing his deviant curriculum in the US Civil War, Whitman was suddenly enveloped in a whirlwind of fact. He gleaned his lifeless form lying in the field on the rain-soaked earth, amongst the leaves, with his head still resting on the thread-bare blanket atop the stone pillow.

Sharon R. Hill is a burgeoning writer of historical short fiction and a variety of contemporary magazine articles. Her prior fiction credits include Point Au View, Brown Tobe, and Life in Silhouette.