You are here: Home / Nonfiction / Paintings to Remember | Rafiq Ebrahim

My visit to Karachi last year left many memories. I experienced the thrills of a ride in minibus and rickshaw; I saw queer human behaviour on the streets of Karachi; I saw abject poverty face to face, and got saddened as I realized that almost nothing was done to alleviate their plight; I was there when some fanatic perverts killed so many people by blasting a bomb in a mosque.  And yet, the people I came across never even had a frown on their forehead. All along I saw smiling faces, eager to greet me heartily. I wondered how they could look so cheerful when there were myriad problems in their life at every step. Perhaps it is their faith in Islam, in God.

The last few days, I preferred to stay at home and reflect, having seen a lot of the country where I had passed my childhood and my youth. But one day my friend, Altaf, insisted that I go out with him and see some exhibits I would never forget.

“Are we going to some art gallery?” I asked.

“I would like to see something indigenous, completely local, unlike what I have been seeing at Chicago Institute of Art.”

“I promise, you won’t be disappointed,” said Altaf, as we came out of the house and got into his Datsun. Rush hour traffic seemed neurotic and totally unsystematic. Drivers and pedestrians obviously didn’t believe in the rules of the road, making one wonder how anybody could drive or walk in such a traffic and still live!  My friend, however, maneuvered his car dexterously, as we reached a kacha by lane near North Nazimabad. He stopped the car by the compound of a shabby residential house. The compound wall was low, but long.  “Ah, look at these!” he said pointing out at the red paan-stained (paan is a betel leaf with betel nut and other ingredients wrapped inside. It makes the saliva blood-red. This delicacy is very popular with people in India and Pakistan) patches on the wall.

“Do you mean to say that you brought me here in this scorching heat in your car without air-conditioning to show me these doings of paan eaters?” I yelled.

Waiving my protest aside, he said, “Now carefully observe these pieces of art, and let your imagination do some work.”

I couldn’t help bursting out in a peal of laughter. Truly, Altaf always managed to find meanings in things where others would find none.

I looked at the ghoulish spots on the wall. There were about five or six in different sizes and forms. “Let’s begin from the left,” he said. “This object appears in an unusual juxtaposition, and seems to float majestically in space. Highly imaginative and reflects the quality of fantasy that must be present in the artist’s mind.” To me, it was just an irregular rectangle with a couple of curves at the bottom.

We moved to the second ‘painting”. “Here’s an example of Cubism!” he said, pointing out at a cluster of big red dots, interconnecting each other with thin broken lines.

The third ‘artwork” seemed to delight him a lot. “This is a two-dimensional flat design, executed in a sketchy, cursory manner. Observe the interplay between positive and negative areas- those filed with colour and those left in white, and see the symmetrical small dots.” 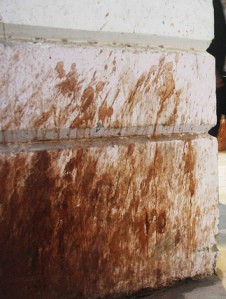 We moved on. “This is the result of the flow of creative inspiration. Here are white, red and again white, red triangles. The perspective is highly effective, almost like a work of the famous Chagall,” he said, authoritatively.  I looked deep into this unsanitary piece and could find nothing.

“Here’s a work of creative talent, bursting with pictorial ideas,” he remarked as we turned towards the right side of the wall. “If you have a sense to recognize art, you will definitely be reminded of works of Degas, Seurat, Beckman or Picasso after seeing all these exhibits.”

We came to the last exhibit. “This delicate little painting conveys the mood of a hot summer day. Note the red hot ball of the Sun, giving out luminous rays.”

I could take no more of this weird analysis. “Altaf, will you stop appreciating this unsanitary, unsocial and extremely unhealthy trait of our paan-eaters?”  Just as I had said this, a bulky, middle-aged man with thick, curly gray hair passed by on a bicycle, spraying an unpainted portion of the wall with his red saliva.

“Ah,” said Altaf. “Now we have also seen an artist, almost of the caliber of Van Gogh. It’s a beauty, a remarkable piece of art, fresh from the artist’s mouth. Look at the glistening patches as they reflect the sunrays falling on them. It shows……”

I did not want to hear any more, so I got into the car. As my friend got in, I said, “And what about this huge mound of stinking rubbish and garbage by the ‘art gallery’? I presume you will say that the old master Pablo Picasso lays buried under, and comes out every night from his grave to admire these paintings”

He laughed and suggested we go to some other places where we could see more of this art.

“Can you take me to the offices of a Councilor or any local government authority RIGHT NOW?” I pleaded

Authors : Rafiq Ebrahim
Rafiq Ebrahim is a freelance writer, contributing regularly to various magazines in Pakistan and USA. He has also written three novels; the latest – BEYOND THE CRUMBLING HEIGHTS(Colors in the life of a slum boy) was published in USA in 2009 and is available at amazon.com, barnesandnoble.com and google.com/books.

“Hello Mr. Murty …” phoned in Sadanandam, the General Manager of ABC bank. “We have reviewed the … END_OF_DOCUMENT_TOKEN_TO_BE_REPLACED

If ever you go to Laxmipuram and ask for the house of Veera Venkata Satyanarayana garu, nobody will … END_OF_DOCUMENT_TOKEN_TO_BE_REPLACED

Sir, I assure you and I repeat it for ten times: "I am not MAD" … "Though I am not looking in a … END_OF_DOCUMENT_TOKEN_TO_BE_REPLACED